📖 Rust in Action is released! 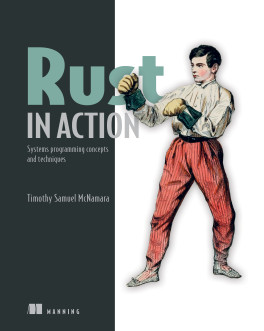 After 4 years of development, Rust in Action has been released!

Rust in Action is a hands-on guide to systems programming with Rust. Written for inquisitive programmers, it presents real-world use cases that go far beyond syntax and structure. You’ll explore Rust implementations for file manipulation, networking, and kernel-level programming and discover awesome techniques for parallelism and concurrency. Along the way, you’ll master Rust’s unique lifetimes model for memory management without a garbage collector.

Rust in Action can also be bundled with the Rust in Motion video course by @carols10cents and @shepmaster as part of the Getting Started with Rust bundle.

I recommend buying direct from the publisher, as your copies will be delivered straight away. Books haven't been dispatched to distributors yet.

Good question! It's intended to complement other material, rather than replace it. Rust in Action is designed for people who like to learn with practical projects and who want to learn what "systems programming" is.

I will let some other people explain it:

If you want a more code-driven / hands-down approach, you can also take a look at Rust in Action.

I just bought Rust in Action a couple weeks ago (after having gone up to chapter 11 in the No Starch book). It's definitely good to have both.

Got myself a copy of @timClicks’s Rust in Action. It includes a bunch of small projects which seems like the best way to progress after learning the basics of #rustlang

If you find [the "Book"] a bit hard to follow [Rust in Action] is a little lighter but still provides a great rust foundation and is very hands on.

It’s worth every penny. I was skeptical, but the book is pretty good. In my opinion it’s one of the best books about Rust.

I love the material so far. Most rust books/tutorials don't dive deep into the OS side - highly recommend!

If you're interested in systems programming with rust then i can recommend "Rust in Action" by Tim McNamara.

What I most like about it is that the examples are complex enough to teach you to solve real world problems.

It might not be free but it's pretty much exactly what you're asking for and should at least give you a lot of ideas to explore further. I've read it myself and I enjoyed it a lot: Rust in Action

A personal thank you note

The Rust community has been tremendously supportive of me during the book's development. Those of you who have been following the project for a while know that the prolonged stress caused me to enter a long phase of anxiety, depression and panic attacks. I'm in a much better place now and so is the book! Thank you so much for your patience.

Some more good quotes have popped up since the book was released.

Holy shit, this is a good book.

If you've been interested in Rust at all, you will probably want this book.

If you want a more code-driven / hands-down approach, you can also take a look at Rust in Action.

I'm going to buy it as soon as it comes out in sweden. Listed as "Not yet released" online at adlibris.com

When you click on the book's cover thumb nail, it takes you to Rust Web Development by Bastian Gruber. Is that intentional?

Also, I was going through the book's preview and found this:

This made me laugh out loud because my favorite Rust talk is by @nellshamrell where she talks about how Traits in Rust are awesome. For anyone that hasn't seen the talk I urge you to take a look. Nell is an wonderful public speaker that takes complicated things and explains it a way that makes sense. The talk on YouTube: Traits and You: A Deep Dive — Nell Shamrell-Harrington - YouTube

Just bought the book, you'll be receiving my $2 soon!

OMG you just made my day!

When you click on the book's cover thumb nail, it takes you to Rust Web Development by Bastian Gruber. Is that intentional?

No, not intentional.. I've changed the link. Thanks!

I'm going to buy it as soon as it comes out in sweden. Listed as "Not yet released" online at adlibris.com

Supporting local retailer is an excellent idea. The publisher is working as hard as possible to get books distributed around the world.

Great! I'd love to buy your book from a local bookstore in France

The distributor is Simon & Schuster. Perhaps contact them to ask which retailers are planning to stock the book?

Yes, certainly it's just me, but I couldn't find an email address to contact the publisher on the page you linked. I found the book sold on Eyrolles, which would be fine if it wasn't listed as "to be published", with a release date of May 2020

OMG you just made my day!

I'm glad to hear that! "I harnessed the power of traits... AND SO CAN YOU!" haha

Any chance of taking the Key-Value store chapter and expanding it into a book on "Distributed Databases implemented in Rust" ?