Why doesn't the compiler issue an error at Line 15 while I am trying to assign it's field with a new value ? It did throw a message at Line 16 saying p was moved at Line 14 already. 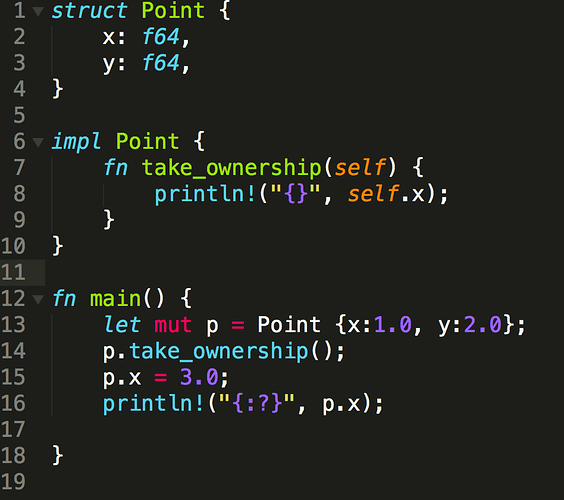 This section in the documentation is describing what is happening What is Ownership? - The Rust Programming Language

Also a small hint. You can post code here without using screenshots by writing the code within these blocks

In this section, The Book also states that :

If we tried to use s after the call to takes_ownership, Rust would throw a compile time error.

I wander that why the compiler complains at Line 16 , not Line 15. Both use the moved variable p. I reassign p's field x at Line 15 and the compiler doesn't give a warning or an error. For the user's perspective, Line 15 is useless if so. My question is: what does the compiler do when it comes to Line 15 ?

The line 15 is a partial initialization. (Failing to find a doc link.) It isn't used very often.

I think you can use the following mental model: moving is essentially memcpy-ing the struct to the called function stack. (usually it's optimized out, but initially it's there) Memory region of old p is still there on stack, but is marked as "moved", which makes it unreadable, but it does not forbid you from writing into that memory. Same story applies to this example:

The only difference is that memory region of p marked not as "moved", but as "uninitialized". Although I agree that your example is strange and ideally Rust should produce error for line 15 as well. (of course if I am not missing some obscure cases where such behaviour will be useful)

I have no idea what the use cases are; but IIRC if you assign all of the fields in this manner, Rust will consider the object to be fully initialized.

Just watch out for the terrifying soundness hole. (surprise, a feature that almost nobody uses has bugs!)

IIRC if you assign all of the fields in this manner, Rust will consider the object to be fully initialized.

Nope, it does not work like this unfortunately. It could be a nice (but arguably rarely needed) feature if Rust could've tracked partial initialization and detect if type became fully initialized.