I am trying to provide better compile errors using quote_spanned and compile_error macro however compiler is giving a lot of nonsensical help messages. Is there a way to prevent this?
The only named struct fields are supported part is my actual error but compiler adds whole bunch of extra stuff 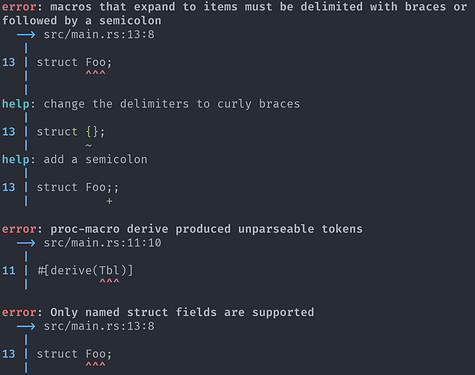 Please post the code you are using to generate the output. It's overwhelmingly likely that the compiler isn't "adding extra stuff", but your proc-macro indeed produces incorrect code.

this is my method to fail with a span.

For macros that use syn, syn::Error is the canonical way to do compile errors correctly. In your case maybe something like: syn::Error::new(span, txt).to_compile_error()

Oh I didnt even know such a method existed quote_spanned is all over the internet for some reason and the long waited Diagnostics API people talk about but syn::Error for some reason was not mentioned anywhere I checked

That fixed it all thanks