I am working on a project that has many peripherals including Gps, Accelerometer, Can and ... . Recently I am facing code size error. I started to optimize my code and when I checked the size of function rust float variable conversion has much cost for me. How can I reduce this size ? 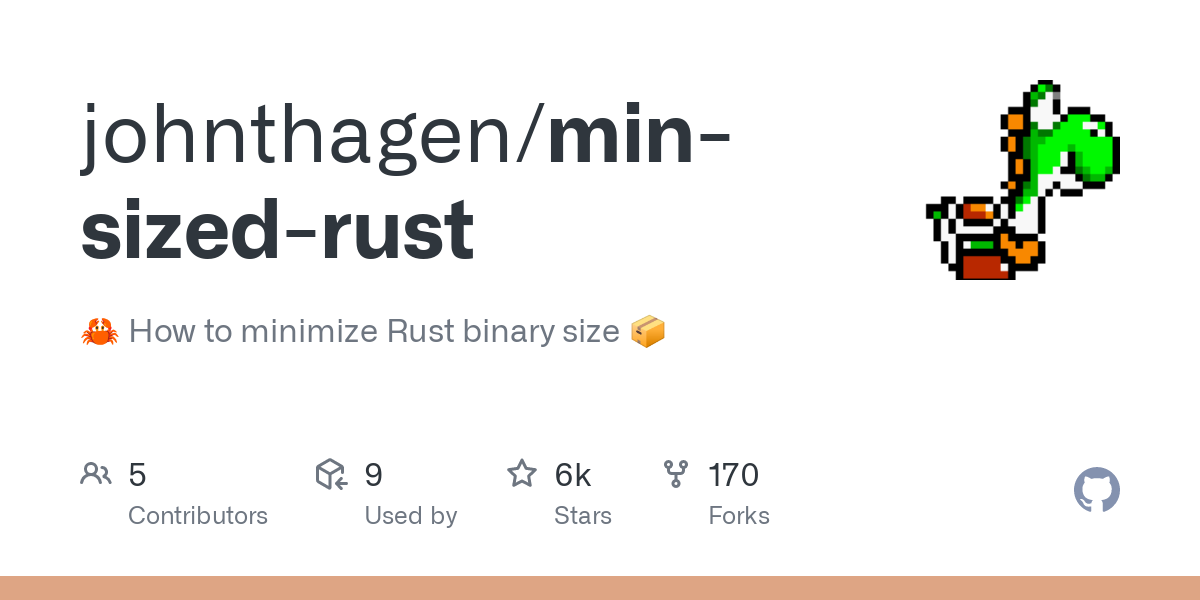 🦀 How to minimize Rust binary size 📦. Contribute to johnthagen/min-sized-rust development by creating an account on GitHub.

But the main rules of thumb are:

At least for big functions.

For instance, look at how the standard library does it:

Trick: use dyn Trait instead of impl Trait in argument position to more easily factor out code.

2. Use opt-level = "z" in the profile settings (as well as agressive lto)

For the Cargo workspace generateing the final binary, you'd add a [profile.{dev/release}] section (depending on whether you are targetting cargo build or cargo build --release) with an opt-level = "z" line under it.

You may also add a lto = "fat" for link-time optimizations.

And I am not sure about it, but maybe codegen-units = 1 could help as well?

Trick: use dyn Trait instead of impl Trait in argument position to more easily factor out code.

This is a good tip, but it comes at the cost of preventing inline calling of the trait methods, thus losing potential compiler optimizations. So avoid using dyn Trait for small and simple methods like struct field access (i.e. getters/setters), especially in performance critical areas. But definitely use it as a means to monomorphize access to big method calls which are implemented in many different forms across a range of different types.

I found it interesting to learn that dyn Trait is implemented as two fat pointers; one to the base struct and one to the vtable of trait methods. So, unless I'm missing something, there is probably no real benefit to using &dyn Trait vs. Box<dyn Trait>.

So, unless I'm missing something, there is probably no real benefit to using &dyn Trait vs. Box<dyn Trait>

The benefit is in not requiring a heap allocation, and letting the caller retain ownership. If you have a local variable var of some concrete type which implements Trait, you can pass &var as an &dyn Trait argument without allocating additional memory for it, and you will still be able to use var after the call is complete.

I found it interesting to learn that dyn Trait is implemented as two fat pointers; one to the base struct and one to the vtable of trait methods.

Strictly speaking, that's the implementation of *dyn Trait, which is the underlying representation of both Box<dyn Trait> and &dyn Trait — The extra information is stored beside the data pointer, rather than beside the referent. This lets a plain dyn Trait have the same memory representation as whatever concrete type it was created from.

Ahh, I was thinking entirely in terms of potential benefits on the receiving method side, but passing by reference rather than value is definitely a benefit for the caller. Good point!

This lets a plain dyn Trait have the same memory representation as whatever concrete type it was created from.

Also helpful info, thanks! Good to know that the heap allocations are only for the owned version. It does make sense that a reference could bypass that. And that's helping me get past some of my disillusionment about the type erasure preventing inlining.

Thanks for your response. The link helped me very much. I also found some linkes about "xorgo". This feature is very good and I found it useful but I don't know how much stable this is. Do you have any idea?

My biggest problem is decimal to float conversion. There is a 10 kilobytes

My biggest problem is decimal to float conversion

I think we probably need more information to be able to help you with that specific issue. What do you mean by “decimal”? (Numbers as strings? Some other non-float numeric type?) And how are you converting them? (f64::from(), as etc.) Is the table in the source code or generated during compilation?

I guess they might be referring to this table - rust/table.rs at 1.60.0 · rust-lang/rust · GitHub - which is somehow not optimized out.

these are size of some memories and functions. they are float to decimal conversions and reverse. they cost me about 30 percentage of my code and that is really high.

I usually convert f64 to u64 using "as". but I have found out that "into" is also another option. what is the difference between them ?

exactly. this variable has 10kbyte size and that is really big.