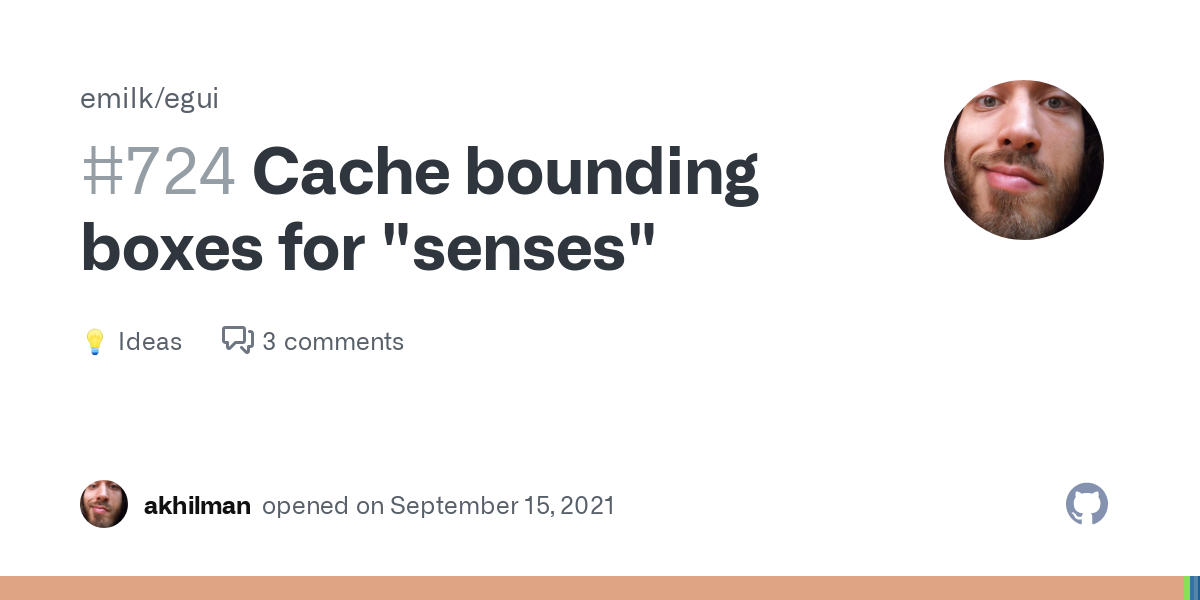 We can save the bounding boxes of widgets during rendering in lists (or maybe a binary tree) for each sense type. So in the next frame, we could cheaply check if the GUI will respond to user input ...

I saw this discussion but I am not too sure if they are actually going to implement caching capabilities or not?

Furthur more if this was implemented would it be as suitable to make a gui application which uses very static animations as though it is retained graphics?

Furthur more if this was implemented would it be as suitable to make a gui application which uses very static animations as though it is retained graphics?

I can't speak for egui as I don't have much experience with it, but I have used Dear ImGui extensively via the imgui-rs bindings (which I help maintain)

I think it kind of "depends" on your exact application design. If I understand right the idea in the linked discussion is to cheaply know "if mouse moves in area X, then we need to redraw". For an appliation you probably don't need this - your application will occupy the whole window anyway (unlike in game where a debug tool probably only covers a small part of the main ~GL surface). E.g if using winit, it's mostly just a case of using ControlFlow::Wait instead of Poll

For specific, very static applications this can work perfectly - no redraws until user does "something". Things become more complicated when you have any animations, even things like a blinking text cursor..

The most interesting "simple" approach I've seen to this is this PR for Dear ImGui:

**What** When enabled, this mode reduces the frame rate (potentially down to …zero) by waiting for inputs (i.e. blocking/sleeping). Both ImGui and user code can require a minimum frame rate for individual components (identified by an ImGui ID) to cater for things like blinking cursor or animations. This is dynamic; i.e. a requirement can be set when starting an animation, and set to zero if/when it's finished. Note that I've used a fairly broad name for this feature (power saving) because in the future we might want to do other things beyond just altering the frame rate. **Why** My use case is a regular desktop application (audio) that I want to use on a laptop without too much noise, heat and power usage. This application does not need to run at the display rate/60fps, even when showing things like real-time waveform and spectrum analyzers. **How** I went for the simplest and ideally the most reliable, and efficient, implementation I could think of. The feature is enabled setting _ImGuiConfigFlags_EnablePowerSavingMode_ in _IO.ConfigFlags_. The binding code can call _ImGui::GetEventWaitingTimeout()_ to know how long it should wait for events; possibly 0, in which case it can poll (or just pass a 0 timeout if supported by the implementation), or infinity (when the frame rate is zero) in which case it can call a non-timeout event waiting method. As said above, user code can add frame rate requirements. I've used an ImPool structure to store those requirements, which allows fast lookup to identify which one is currently the highest one (if a cursor requires 6fps and an animation requires 30fps, naturally the effective minimum frame rate will be the highest, 30fps). ImGui does not share this structure; it uses its own boolean flags (currently a single one, _Blinking_). **Integration** I have added support for blinking cursors in ImGui. I have added the feature in the demo app. A good test is to enable the power saving mode and observe the FPS counter when looking at the animated widgets example. I have added support for the SDL and Glfw (OpenGL 3) bindings, and the Allegro binding. **Testing / Known issues** I have done some manual testing on Linux, with the demo (SDL, Glfw and Allegro bindings) and my own app. It seems to work well. ~~One known issue is that the frame rate requirement for blinking cursor is not properly reset when the input box is not visible. That should be easy to fix; I thing I can use a flag.~~ (FIXED) **Next steps** I'd like to have your input. I plan to test on Windows and implement support in more bindings, and use a power profiler tool to get an idea of the potential power saving.