What is the common way to use procedural macros internally?

In my case, I want to use procedural macros to do some internal job for my lib, which means it's totally useless for a user. But for now, procedural macros must be written in a separated crate and marked it as proc-macro = true.

I wondered what other famous projects handle this problem, I have two (or maybe three) chooses:

If you want to publish your library to crates.io, then the proc-macro dependency must be published there as well. There's currently no way around this.

If you "publish" your library only as a git repo, then the proc-macro can be in the same repo as a relative path dependency.

I vaguely recall discussions about allowing crates.io packages to bundle proc macros with a library crate, but my searching isn't turning that up right now either.

When using a git dependency the whole git repo is fetched and checked out. Within the git repo crates can depend on each other using path dependencies.

This is probably what I was remembering:
https://github.com/rust-lang/lang-team/issues/139

See the discussion on zulip. It initially mentioned proc-macros, but that was dropped, and the whole proposal was eventually closed anyway.

One interesting thing to keep in mind is that proc-macro logic does not necessarily need to be invoked as a proc-macro.

for instance, kind of code, then know that you could be exporting generate_stuff as a function over ::proc_macro2 types rather than ::proc_macro ones, thence yielding a function rather than a macro, and then have some helper Rust script that uses that function to generate some generated.rs kind of source file that would be tracked by the crate (even if it's generated code).

This, effectively, means you'd be easily caching the output of this "procedural logic", thence eliminating the need for each and every dependent to run such logic, leading not only to faster compile-times, but also to avoiding the "I have to publish that procedural logic to some registry" problem altogether. Indeed, such helper Rust script would be a complementary dev-siding tool which would not need to be officially published (even if it could be nice to still expose it somewhere, such as in the repo, so that people can still opt into using it themselves).

If you are instead doing something like #[some_annotation] to get some helper stuff, you could sometimes switch to a macro_rules! implementation that you would apply using

Use declarative macros in attribute or derive position

Other than those two options, yeah, the simplest thing would be to publish the internal crate over crates.io even if it wouldn't be intended for direct usage. This happens already quite often, so you shouldn't worry about "cluttering". Just "mangle" the name enough to deter people from accidentally directly depending on it

May I ask do you experts rely on IDEs a lot? I'm always trying to avoid of using normal macros because the IDE will not detect the code inside it, leads to a lot of functioning tools broken (code index, function auto complete, grammar checking and so on, and I really enjoy those features). While using procedure macros is a little better, since the code which be annotated is normal codes and can be detected by the IDE, only generated code will be undetected.

I wouldn't avoid macros just for its own sake. You'd be surprised how well IDEs handle them these days. 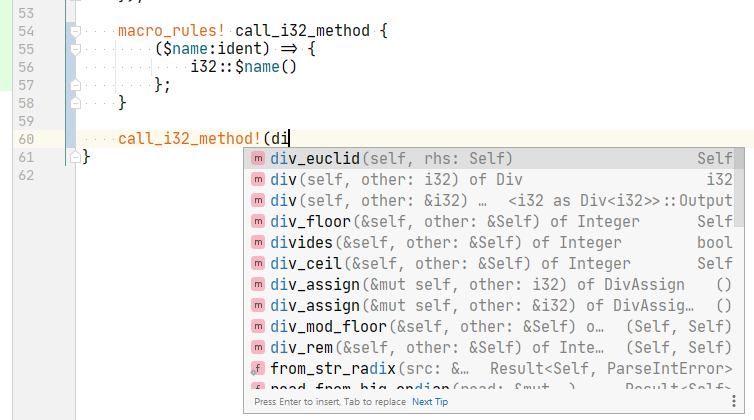 In this article, we’ll discuss challenges that language servers face when supporting macros.This is interesting, because for rust-analyzer, macros are ...