What does the label `disposition-merge` mean on a Github issue?

I'd think the label only applied to PRs. Or is this just a case of mislabeling?

GATs: Decide whether to have defaults for `where Self: 'a`

### What is this bug? We are moving towards stabilizing GATs (tracking issue:… https://github.com/rust-lang/rust/issues/44265) but there is one major ergonomic hurdle that we should decide how to manage before we go forward. In particular, a great many GAT use cases require a surprising where clause to be well-typed; this typically has the form `where Self: 'a`. It might be useful if we were to create some rules to add this rule by default. Once we stabilize, changing defaults will be more difficult, and could require an edition, therefore it's better to evaluate the rules now. ### I have an opinion! What should I do? To make this decision in an informed way, **what we need most are real-world examples and experience reports**. If you are experimenting with GATs, for example, how often do you use `where Self: 'a` and how did you find out that it is necessary? Would the default proposals described below work for you? If not, can you describe the trait so we can understand why they would not work? Of great use would be example usages that do NOT require `where Self: 'a`. It'd be good to be able to evaluate the various defaulting schemes and see whether they would interfere with the trait. Knowing the trait and a rough sketch of the impls would be helpful. ### Background: what where clause now? Consider the typical "lending iterator" example. The idea here is to have an iterator that produces values that may have references into the **iterator itself** (as opposed to references into the collection being iterated over). In other words, given a `next` method like `fn next<'a>(&'a mut self)`, the returned items have to be able to reference `'a`. The typical `Iterator` trait cannot express that, but GATs can: ```rust trait LendingIterator { type Item<'a>; fn next<'b>(&'b mut self) -> Self::Item<'b>; } ``` Unfortunately, this trait definition turns out to be not quite right in practice. Consider an example like this, an iterator that yields a reference to the same item over and over again (note that it owns the item it is referencing): ```rust struct RefOnce<T> { my_data: T } impl<T> LendingIterator for RefOnce<T> { type Item<'a> where Self: 'a = &'a T; fn next<'b>(&'b mut self) -> Self::Item<'b> { &self.my_data } } ``` Here, the type `type Item<'a> = &'a T` declaration is actually illegal. Why is that? The assumption when authoring the trait was that `'a` would always be the lifetime of the `self` reference in the `next` function, of course, but that is not in fact *required*. People can reference `Item` with any lifetime they want. For example, what if somebody wrote the type `<SomeType<T> as LendingIterator>::Item<'static>`? In this case, `T: 'static` would have to be true, but `T` may in fact contain borrowed references. This is why the compiler gives you a "T may not outlive `'a`" error ([playground](https://play.rust-lang.org/?version=nightly&mode=debug&edition=2018&gist=821e30ee635326a22fc19cd940bbaf62)). We can encode the constraint that "`'a` is meant to be the lifetime of the `self` reference" by adding a `where Self: 'a` clause to the `type Item` declaration. This is saying "you can only use a `'a` that could be a reference to `Self`". If you make this change, you'll find that the code compiles ([playground](https://play.rust-lang.org/?version=nightly&mode=debug&edition=2018&gist=87cb2430ee76ece77499d3c6605874df)): ```rust trait LendingIterator { type Item<'a> where Self: 'a; fn next<'b>(&'b mut self) -> Self::Item<'b>; } ``` ### When would you NOT want the where clause `Self: 'a`? If the associated type cannot refer to data that comes from the `Self` type, then the `where Self: 'a` is unnecessary, and is in fact somewhat constraining. As an example, consider: XXX finish this ### What could we do about it? There are a few options. Here is the list of ideas we've had so far. 1. Status quo: require that people add the `where Self: 'a` bounds, and try to do better with diagnostics. 2. Simple, limited default: If a GAT has exactly one lifetime parameter `'a`, add `where Self: 'a` to both traits and impls. Need some way to opt out. 3. More extensive defaults: e.g., for *every* lifetime parameter `'a` to a GAT, add `where Self: 'a`, and maybe `where T: 'a` for type parameters too. Need some way to opt out. 4. Add a syntactic sugar for this common case, e.g. `type Foo<'self>`. This could be added later. 5. self-oriented defaults: Given some GAT `Foo<'a>`, if each use `Self::Foo<'b>` within the trait methods references a `'b` that is the lifetime parameter for `self`, then add `where Self: 'b`. While kind of complex to explain, this captures the intuition that `'a` is meant to be the "lifetime of the self reference" in practice. We probably *still* want a way to opt out (though maybe not; maybe that way is "don't use `&'a self` notation"). 6. Even smarter defaults A: Look at the method signatures in the trait. If we find that each use of `Self::Item<'b>` is associated with a lifetime `'b` where `Self: 'b` is implied by the method arguments, *then* infer that `where Self: 'b`. This is a more extensive, general version of *self-oriented defaults*. We probably *still* want a way to opt out (though maybe not). In general, once we stabilize GATs, we likely cannot add defaults, except via an edition -- although we may be able to get away with it in this instance if the defaults are smart enough.

It is automatically added by rfcbot when someone with the right permission comments @rfcbot fcp merge. It indicates that said person proposed to merge/accept the change. Once enough people sign off on this, the final comment period (fcp) starts. It lasts for 10(?) days. If there are no objections, the fcp will end and the respective change has been accepted and a PR for it will be merged after review. 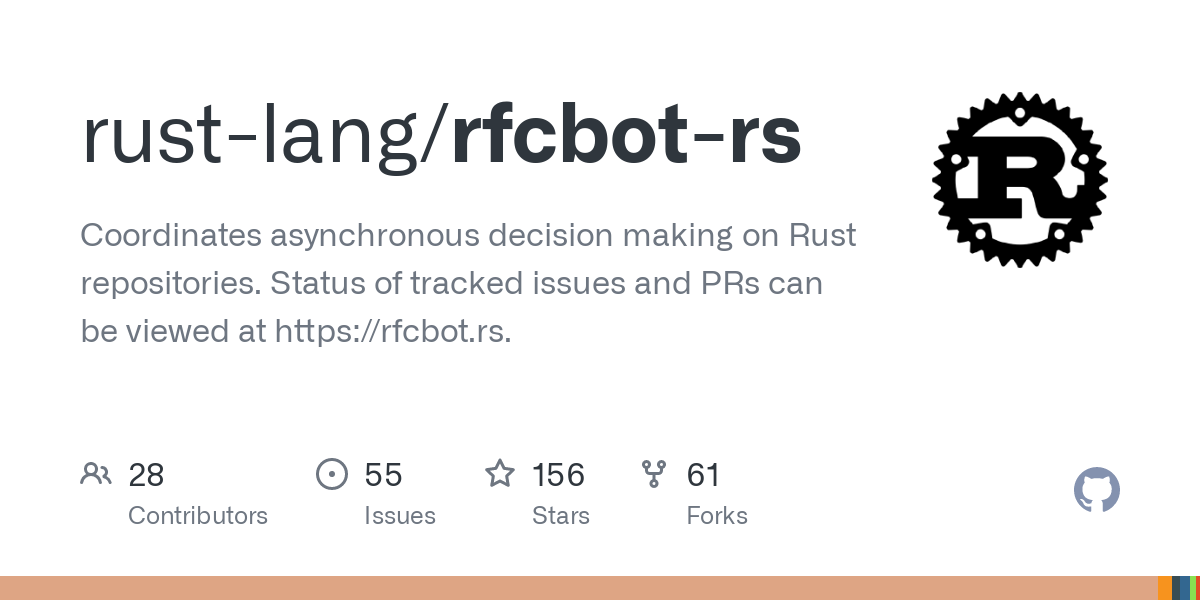 Ok I think I understand. It's like a mini-RFC but with an issue instead of a PR.

Worth noting that some things are a bit out of date since FCPs started happening on issues and not PRs.