Use or use crate?

Well, another beginner interrogation.
What is the more correct for infile modules?

The docs seem to say both are correct? Is it one which is more idiomatic? If yes why?

The second one assumes http and server are modules within the current module and won't work elsewhere.

The first is essentially an absolute path and the second is a relative path. This is similar to file system paths.

I tend to use the second when I can, so that the current module (assuming it isn't at the root) can be moved around in the overall hierarchy without changing anything as long as its child modules move with it.

The first is essentially an absolute path and the second is a relative path. This is similar to file system paths.

But I now moved the files (http/request.rs, http/method.rs and server.rs) and it still compiles without crate:: 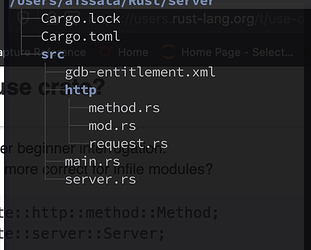 Because its path is still the same, it is directly under the crate's root.

The crate tree is distinct from the filesystem tree (but related). I always starts with lib.rs or main.rs, and every mod statement adds a node. If the statement looks like this, the compiler will look for a corresponding file in the filesystem:

But you can also include the module code directly:

in case of modules
putting

in main.rs
is the same as

look up the chapter in the rust book. It really is quite easy and flexible once you get the hang of it.

It does, thank you!