Hi guys,
I am planning to use Rust for Embedded applications on Ubuntu 18.10.
On my first day itself I am getting this error .
I tried to install cargo-generate from cargo tool like 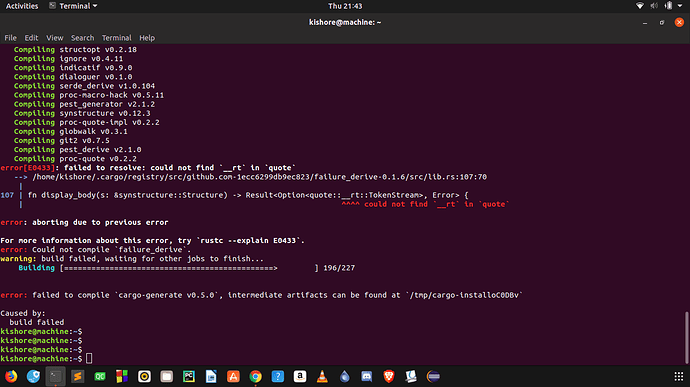 Yes, this is a known issue. See here.

So how do I resolve it for cargo-generate .
PS:Found your reply on the thread

See the thread I linked, there's more info there.

BTW, my reply there is about a hypothetical extension to cargo install. So it doesn't work today.
The real solution seems to be based on cloning the repo, then altering the Cargo.toml to force a newer version of the dependency.

It should be working now with the release of failure v0.1.7
https://crates.io/crates/failure/0.1.7

No, cargo couldn't install cargo-generate because the failure dependency was broken.

Interesting that they published an unbreaking change (which, ironically, is a breaking change) as a point release.
I mean I get it, if they didn't then the onus to fix the ecosystem at large would fall on maintainers distributed everywhere, and now it's just the maintainers of failure (BurntSushi?) that have to bother with that.

Seems the issue is fixed for cargo-generate

quote did not break semver here. failure was relying on an unpublished API in quote.

I knew it was a long time well-known person in the Rust community and your name popped up in my head (I'm guessing because I use the regex crate extensively). But I wasn't sure either.
I just looked it up and I was half-right: @withoutboats is also pretty well-known in the community. Sorry about the confusion.

As for the quote failure (pun intended), I guess I'll have to take a peek at the code. I'm really curious what could on the one hand require using an unpublished API but on the other is easy enough to rewrite to not need that API anymore. Either that or some functionality was slashed.

Or there was no other choice when failure_derive was first written.

Boats is also not maintaining failure these days, as far as I know.

Fixing bugs is absolutely fine, with regards to semver.

Boats is also not maintaining failure these days, as far as I know.

Sure but it's still his name on the crate. If he's not maintaining it anymore that I assume it's because of the fact that better alternatives are available now, not least of which is an improved Error trait.

Fixing bugs is absolutely fine, with regards to semver.

If say that depends on the actual changes made. If the API changes, then it's quite unlikely that a point release is appropriate. The interesting thing about this is that the API used (and purged) was a private one, not a public API.