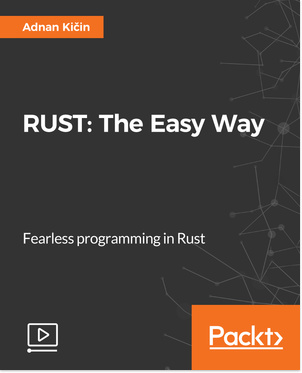 This course covers the fundamentals of the Rust programming language, its core concepts, and best coding practices. It starts with the basics and goes on to explain how to get started by developing a simple Rust program. You will also learn immutability, conditionals, loops, arrays, and strings to enhance your programming skills. Moving ahead, you will get a deeper understanding of Rust, by acquiring knowledge of structures, enums, and functions. Furthermore, you will learn to test your programs using Cargo. Additionally, you will get an experience of generic data types, the idea behind lifetimes, and concurrency in Rust.

Finally, at the end of the video course, you will be proficient enough to write better, safe, and maintainable code in Rust by building an application.

All the code and supporting files for this course are available on Github at https://github.com/PacktPublishing/-RUST-The-Easy-Way

What You Will Learn

Adnan Kičin
Adnan Kičin is a software developer based in Sarajevo, Bosnia and Herzegovina.

He is an active member of the programming community in Bosnia, and he has been organizing and hosting the Open Web Sarajevo Meetup for over a year now. Adnan also co-hosted Sarajevo's first Hacktoberfest last year and organized the first Quora Meetup in Bosnia.

Adnan has also been programming in C and C++, and to prevent himself from getting rusty, he started using Rust.