Hello Rustaceans! I'm a new Rustacean setting up dev environment with VSCode and rust-analyzer. I observed that rust-analyzer is running about 5 times faster on Linux than on Win10 (I use the same settings as using clippy). Is this behavior expected? Here is my environment:

update: I highly suspect Windows Defender causes this issue. Every time I save my .rs file (this triggers rust-analyzer), the antimalware service will be triggered, and its CPU usage is high. I tried to set the whitelist as follows, but it doesn't work. Any suggestions? 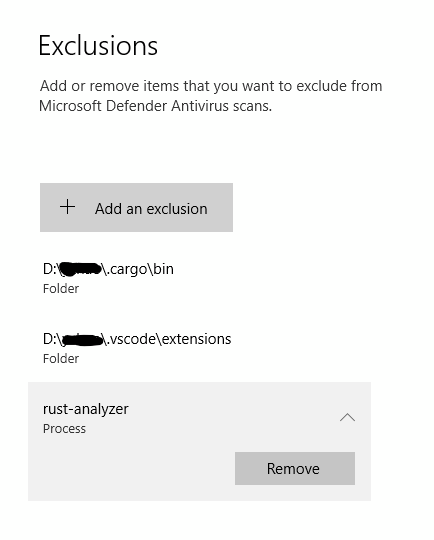 I remember some issues with disk access. Are you using HDD?

Thanks for replying! No, I'm using SSD. I will update the hardware details.

If it is Microsoft Defender, could you try whitelisting the target folder of your project? I believe that's where rust-analyzer will be storing all the intermediate files it writes to while compiling/checking code.

Thanks! I updated my whitelist to include my workspace folder as follows. Yes, rust-analyzer now runs faster

But still, Windows Defender will be triggered when I save my rust file, which might explain the speed difference between Linux and Win10. So, some more folders should be included in the whitelist. Unfortunately I have no idea now 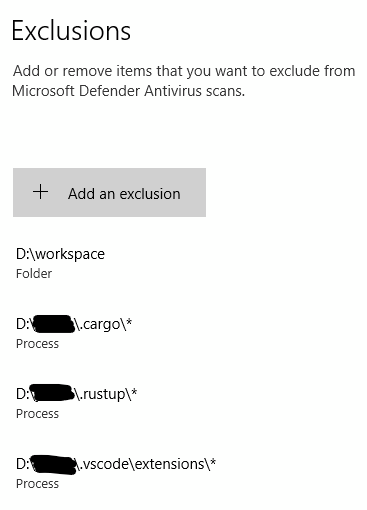