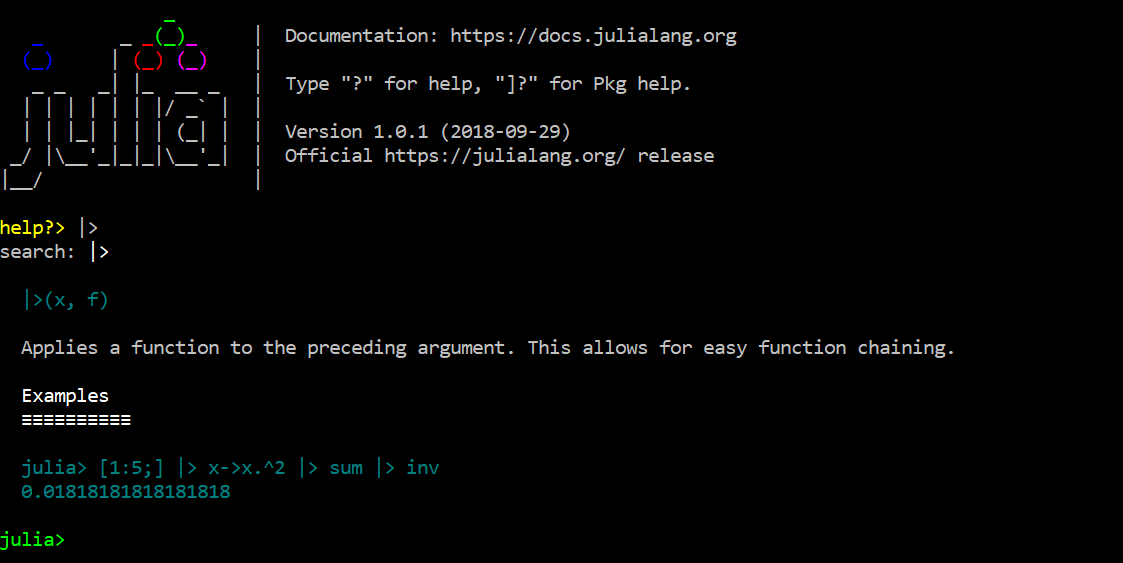 Nope, there's not. There was a crate though, where you can use (I guess it was) Haskell-like chaining as a "special syntax"... Cannot remember the name though...

Note that julia is doing some magic there - it knows that the fn x->x.^2 applies to the elements, and sum applies to the whole array. In haskell you'd probably (I'm not an expert) need to use the functor or applicative typeclasses when mapping the first function over the array. I wrote a blurb about these higher order constructs on urlo.

Edit There's also operator precedence to consider. In haskell, there are 2 ways of doing function application: func arg and func $ arg. The latter has much lower precedence, so you can do things like
func1 . func2 . func3 $ arg (where . is the compose operator).

There was a crate though, where you can use (I guess it was) Haskell-like chaining as a “special syntax”… Cannot remember the name though…

I sometimes use this:

It does add type-based dispatch, which Julia does in a more general way and Elixir doesn't really have at all (no idea what F# does), but it's otherwise the same.

How can replicate Julia code above with your proposal!

My recommendation is not to try to do things like you would do in Julia. Better is first learning Rust to a certain extent.

As a metapher: If, for example, you learn to prepare Russian food you would first try to get somehow fluent doing it before mixing it with for instance French food subtleties. Just my 2 Cents.

Thanks, I replicated the Julia example as below in Rust:

I've had some fun with this:

I'm getting a bit of a dejá vu; this style of piping and how it fits (or doesn't) in Rust has been discussed before.

To prevent us from repeating the same discussion again (although the situation may of course have changed!)

I'm new to Rust, and have yet to finish the "book" so please forgive my ignorance if something like this exists already: Does Rust have a pipe operator, or have any plans to implement a pipe operator like some other languages have (i.e. F# and Elixir)? By pipe operator I mean this: [ 1, 2, 3, 4, 5 ] |> iterate(); Where the results from the left hand side of the pipe ( |> ) are inserted into the first parameter of the function on the right hand side. It makes code much easier to read especia…

I have made an RFC (one more): https://github.com/rust-lang/rfcs/pull/2656
Please, do not hesitate to discuss my RFC there.