Parsel is a set of #[derive] macros and helper types for generating ready-to-use parsers very easily and quickly.

The Rust ecosystem already offers a wide variety of parsing crates, so why would you need yet another one? There are basically two main approaches to parser generators in Rust:

Parsel solves all of these problems by letting your custom AST node types be the ground truth for the grammar, from which it automatically derives implementations of the syn::Parse and quote::ToTokens traits.

The way this works is as follows:

What about parsing more complicated productions, such as arbitrary repetition, parentheses/grouping, and optional sub-productions? Parsel provides a rich set of generic helper types for each such common task. You can parameterize these helper types on the sub-productions of your grammar, and then directly embed them into higher-level AST node types in order to support deriving all kinds of complicated parsers.

See the JSON parser example in the official docs.

enum types will implement Parse by attempting to parse each variant in order, and returning the result of the first one that succeeds. ToToken will be implemented on enums in the obvious way, by forwarding to the fields of the currently active variant. This behavior corresponds to alternation of productions in a grammar.

It sounds like you’ve chosen a comprehensive¹ (PEG-style) grammar definition instead of a constructive one (BNF-style). This has the nice property of defining away grammar ambiguities, but at a cost: If you have two different parse trees that represent the same token stream, serializing one of them will parse to the other. Do you have any guards against programmers accidentally tokenizing these impossible-to-reproduce structs?

¹ i.e. based on comprehension — There’s probably a standard term for this family of grammar descriptions, but I don’t know what it is.

No – in brief, it doesn't attempt to guard against people not knowing what they are doing

These all seem very hard to detect if I want the generated code to be locally compositional (ie. not require knowledge about subproductions or enclosing productions).

that can be avoided by using the packrat parser algorithm, which can parse any PEG in linear time (assuming no left-recursion):
http://pdos.csail.mit.edu/~baford/packrat/thesis

there's apparently also the pika algorithm, which can parse any PEG even including left-recursion, as well as having much better error-recovery -- it's also linear time:

A recursive descent parser is built from a set of mutually-recursive functions, where each function directly implements one of the nonterminals of a grammar. A packrat parser uses memoization to reduce the time complexity for recursive descent...

I'm aware of Packrat parsing, but as a first attempt, I definitely wanted to emit simple recursive descent code, and I'm still not sure off the top of my head how I would go about caching state across AST nodes (while still keeping the generating and the generated code clean). Maybe one day I'll do some research or figure it out.

i wrote a packrat parser generator in c++ several years ago, you could try it out and read the generated code for some ideas of how to do the AST memoization: 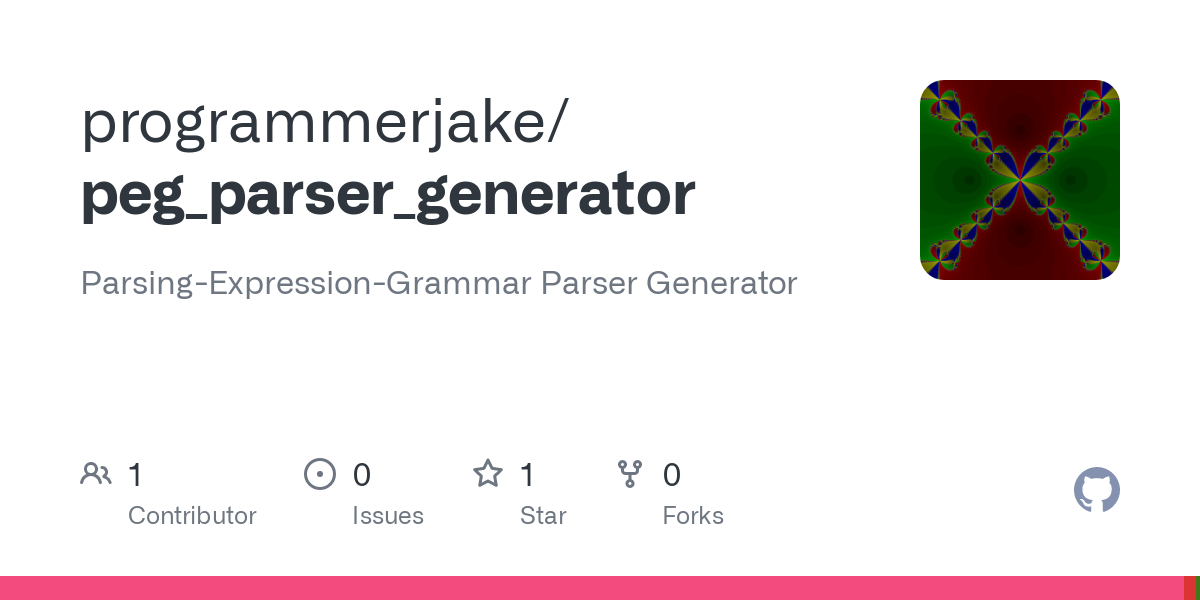 Parsing-Expression-Grammar Parser Generator. Contribute to programmerjake/peg_parser_generator development by creating an account on GitHub.

you'll need a c++11 or later compiler and cmake and make:
on Ubuntu (other OSes should work, but you'll have to figure out installing cmake and stuff yourself):