Panic when I clone the Arc pointer

I' sorry I can't give the simply code sample, the project is so big, but the error reappears inside a function.
Sometimes it panics at let old_size = self.inner().strong.fetch_add(1, Relaxed); line, mostly it just abort().

I print some debug messages before cloning the pointer, the code clones the Arc pointer 39 times, but the value of strong makes me confused.

Why does it abort when I clone the Arc pointer?
Any help would be great appreciated. 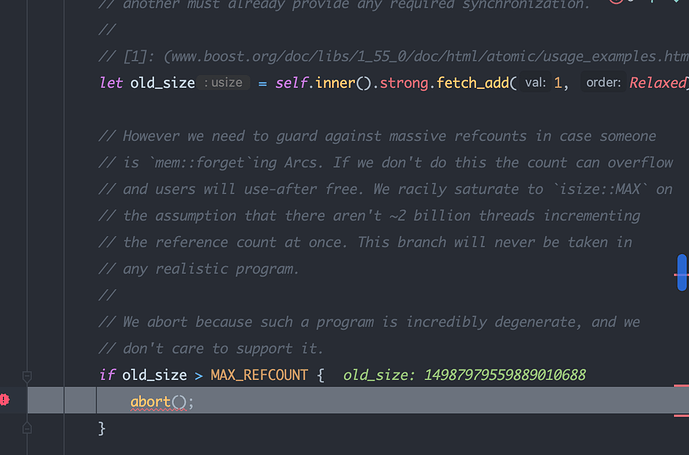 Thanks for your reply, actually I don't use C code and unsafe block inside the method, how can I check the leaking problem?

If you have good machine with dozen of CPU cores and spin them all 100% to run program which does nothing but leaking the single Arc, it would take decades before it aborts. If it aborts within a day, it's not your problem.

Oh I missed this part. Memory errors have global scope, which means every unsafe code ever called within the process would be the suspect.

Are you using a nightly compiler with features (some of those have known bugs)?
Are you compiling for some uncommon platform (like embedded)?

So it's very likely a bug in unsafe code, or a unsafe block that calls non Rust code (doesn't have to be C). It could exist in what appear to be unrelated places in your code, but are likely called before this. The bug could be in an unsafe block of a dependency you use (The unsafe in the std library typically has a lot of testing and validation, so that's the last unsafe code I would dig into). I would guess that the Arc is getting turned into a pointer somewhere instead of what the arc holds and passed to some external code which corrupts the Arcs counters. Another possibility is a use after free. Both of those should only be possibly within an unsafe block.

Thanks, I will check my dependencies.

Try running your program under valgrind. It may not catch invalid access to the Arc directly, since the counter is still within an allocated program-accessible area, but if something sprays memory badly and hits other addresses too it could be caught.

This error might also be caused by unsafe/FFI code decrementing the count manually or causing a double free with unbalanced Arc::from_raw.