I'm a structural engineer trying to learn Rust. I've purchased (3) different books, but this one concept is still unclear.
I have seen the expression 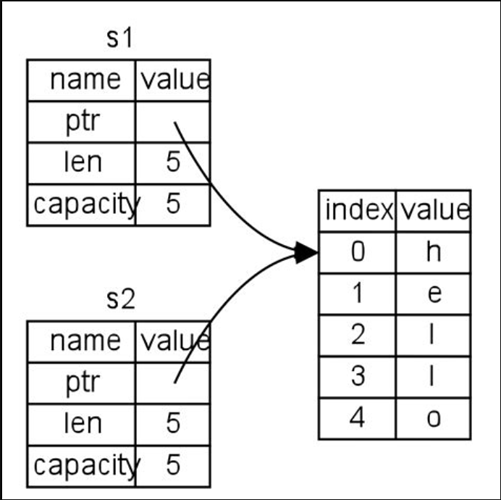 when describing ownership. However, where in this graphic are the actual variable and data type registered? Are there additional pieces of information associated with this assignment that are not represented in the graphic?

Where is s2 defined? I don't see why it is auto sharing the 'hello' repr with s1.

Although this graphic is describing ownership, my question more directed at trying to understand, with a graphical representation, what are all of the pieces of information that are tied to the expression, and where are they stored.

Items 1 and 2 above are not represented in the table shown in the graphic.

1 and 2 have a concrete existence only during compilation: They affect the code that the compiler generates, but do not appear explicitly in the final binary.

I believe your questions have been answered, but here are entirely too many words motivated by what I perceived [1] prompted the questions.

It's showing the state of memory (conceptually anyway [2]) for

The assignment just copied over the pointer, length, and capacity. The compiler does flow analysis to know that s2 is now the owner and s1 is "dead" -- you can't use it anymore. Since you can't use it, it is ok that it is still pointing to the same memory location. When the block exits, s2's destructor will run, freeing the memory. s1's will not; it is no longer the owner.

If you did this instead:

The the reassignment of s1 will destruct the first string, and s1's destruct will drop the second string.

In more complicated scenarios, where the compiler cannot figure out if an object needs to drop or not, it will generate a binary flag for the objects that need checked when the drop scope exits. Drop is a big topic, but here's a few short examples.

The compiler remembers these bits, but conceptually throws that information out after compiling things down to a point where it doesn't need the high-level information. Rust is a statically typed language, which means the type of every variable [3] is known at compile time and doesn't change at run time, so there's no need to store it dynamically (at run time). It doesn't have dynamic evaluation / interpretation either, so there's no need to keep the variable names around.

I say conceptually, as there are various scenarios where the information is retained in some way. Some examples:

But in the general case, at the language level, there's no reason to keep a variable name or type in the binary.

There are various parts of the language that sometimes seem like there is dynamic typing, such as automatic coercions, e.g. from &String to &str [5]. But these are operations on the values that result in a new value with a different type (even in cases where the values consist of the same bits).

Rust does have type erasure (dyn Trait) as well, but note that