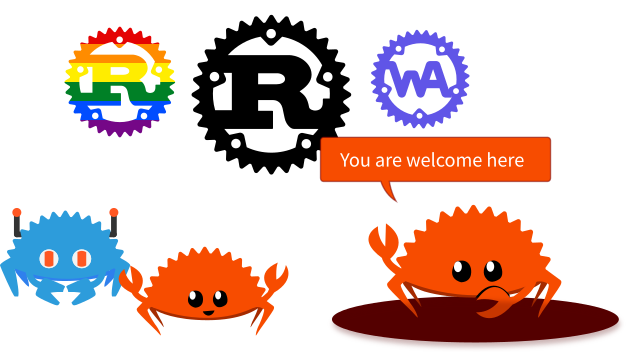 On Monday, a group of four Wellingtonians sat around a table and discussed ideas for fostering the local Rust community: Find groups that host online or in person events and meet people in your local community who share your interests.

This was scheduled as a "morning coffee meet + greet" rather than a typical talk after work with pizza+beer. I framed it this way because I've

The bulk of the discussion was centred around what a useful meetup looks like and what Rust could offer:

I mentioned to attendees that I had written up some notes on what I would love to create. Here's an extract from an email that I wrote when contemplating rekindling the local Rust scene:

I've been mulling over the idea of what an ideal technical meetup would look like for Wellington. There are many (vendor-sponsored) tech meetups, and I would like to do things slightly differently than every other meetup.

Here are some ideas:

Once the group is established, loose engagement from international players in Rust would be neat. Time zones makes this hard, but perhaps it could be something worth looking into.

Much more aspirationally, I would like to see an informal community of Wellington's strongest technologists gather around the meeting. There have been many successful product companies built here.

Why not foster an environment that could nudge Microsoft Research/ARM/.../something home grown to experiment here? Is there anything else in the scale of Nyriad likely to emerge?

The Auckland Rust meetup has a slack (invite link) if you're interested in talking with other meetups around the country.

I sort of hate Slack and prefer to avoid it if I can. Let me know if you would ever consider using the open source society's Rocket Chat instance and I'll sort you out w/ a channel etc.

With Rustaceans in almost all time zones, there are many who potentially could cope with the NZ time zone difference were there a need for their real-time participation. Why not ask when you have progressed your meeting plans to where you might need them and see who responds?

I lurk on their slack but I'm actually based in Sydney myself and involved with the Meetup here. I'll mention the rocketchat to them though.