I have a certain function that right now returns:

Why? When we try to eval t: T on a remote machine, we can run into a number of errors:

So now I have this triply nested Result.

One possible solution to this is:

But this enum feels a bit weird, like duct taping over a problem rather than addressing the issue.

What is the idiomatic way of dealing with this ?

this enum feels a bit weird, like duct taping over a problem rather than addressing the issue.

And nevertheless that's exactly the approach which crates like thiserror do endorse.

Another way is, of course, to just Box<dyn Error> anything (or use anyhow, if you want something more ergonomic).

Short answer: yes. The Result type is meant to be used following a monadic pattern, so you are supposed to flatten it.

And nevertheless that's exactly the approach which crates like thiserror do endorse.

Not only thiserror but also the language itself kind-of endorses it, in that

I've seen an approach of keeping two levels of Result, one for the kind of errors which should be kept private and one the public "domain" facing errors. 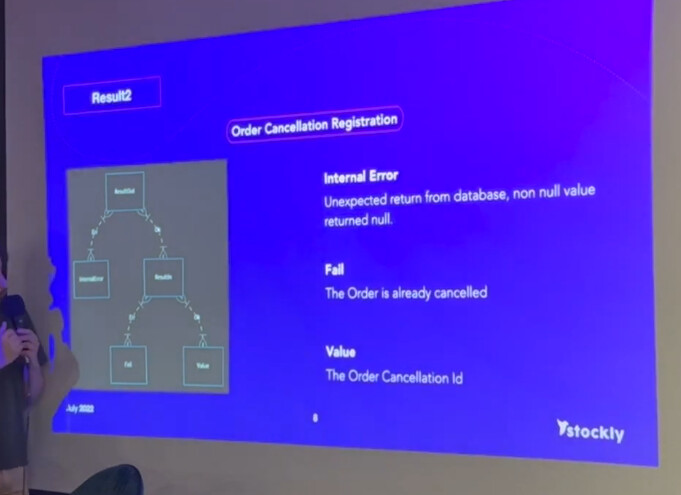 I don't necessarily agree, but I still think about it.

Taking this advice to the limit, it seems the approach is to either (1) through thiserror or (2) through manual code, to build something like:

Well, it's entirely possible that you want to have not a single enum, but a hierarchy of them - each "layer" of the logic will have an enum, each variant of which holds inside another enum from lower layer.

I think we once discussed that a possible outcome could be that a library's functions should each return the most specific error possible and that maybe that library could define an error enum encapsulating all of its possible errors for the user's convenience.

I think we once discussed

It seems it was my idea to do this

There are lots of discussion about this topic

lots to read and reason about

I found this to be a pretty good summary of error handling in Rust. My big takeaway was that thiserror may be nice, but the extra effort to write your own full enum could be worth it to save compile time.

Rust: Structuring and handling errors in 2020

After working through “the book” on the Rust programming language and getting started with the first non-trivial, real-world application I found myself faced with a question I didn’t yet feel well-equipped to handle: “How should you structure error...

I did a search for 'compile', and all I got was

Compared to the previous version, our new code is a lot more specific. Users now get a lot more insight into the possible error cases that might be returned. As an added benefit, we also no longer have to Box Error because the size of WordCountError can be determined at compile time.

Where does it take about compile time of enum vs thiserror ? Compile time is very important to me.

The point is that sometimes it's better if the implementations thiserror would generate for you are written by hand, so that compiler doesn't spend its time on their generation.

Ahh, here was the bit at the end about it. Blame the proc macro process.

I think the examples given of "internal errors" on that slide are right on the edge of where I would instead panic, depending on the kind of package I'm building and what it means that the error happened: an unexpected None probably means my crate has a bug, and a panic is better there, while invalid data probably means something else has messed with the file / DB, so a specific error saying that is more helpful. Overall, I'm not sure there's enough room between panics and semantic errors to fit internal errors.