How to Understand NLL vs. Polonius Borrow Checking? (with example)

Hello, I am a beginner trying to understand the difference between stable borrow checking and Polonius. Why does NLL reject this code, but Polonius allow it? I would also appreciate feedback about style issues in the code itself; likely I am doing many things wrong.

Briefly, NLL does not "realize" that a particular borrow is never used again after my loop scope ends, but Polonius does. Maybe using break to end this loop is the problem? But I really don't understand why: my code appears similar to Walking Down a Data Structure (Problem Case 4) of the NLL RFC, so I expected it to be admitted by the current borrow checker. I did search for visualization tools for borrow checking, but could not find anything easy to use. I tried to find something that would call promising-sounding functions like explain_borrow from rustc_borrowck and build a graph, but couldn't. Any references appreciated.

Anyway, I am doing the Stanford Linked Lists problems with the safe types from Rust With Too Many Linked Lists. I'm working on "insert in sorted order," and I know this solution is wrong --- but it still summarizes my confusion about borrow checking, so I'd like some help with that before I fix all the edge cases. Here are the types:

Here is the implementation that NLL allows:

Here is the implementation that NLL rejects, but Polonius accepts. As far as I can tell the only difference is moving a section use of cur_link outside the loop that "walks" down the data structure.

I get borrow checking errors in the _pol implementation:

both sorted inserts compile, my tests run, and they behave as expected (incorrect, but working for non-edge-cases). Please help me improve my mental model of the current borrow checker vs. Polonius vs. the "platonic ideal" of borrow checking.

1. A not so simple study of a simple case

So, for starters let's study the following simplified snippet:

This is basically what this slide (https://nikomatsakis.github.io/rust-belt-rust-2019/#84) from Niko's user-friendly presentation about Polonius says:

Indeed, an outer / a generic lifetime parameter is treated, by NLL, as a graph spanning through all branches until reaching the return: 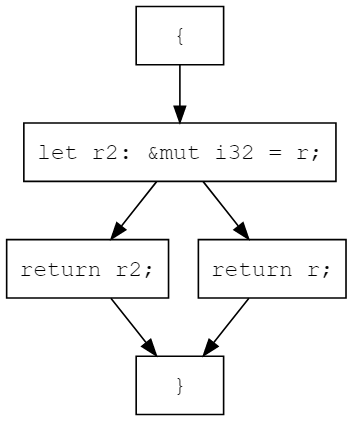 Indeed if we consider what the lifetime of the borrow inside r2 is, it must contain that outer / generic lifetime parameter 'r, which is viewed as a special "through-all-branches exit path". Given that r2 is returned so that its own lifetime has to match this special one, it means the type of r2 is thus one involving this "through-all-branches exit path" region, so starting from the let r2 node, its lifetime spreads across all subsequent nodes, including the return r; one, so that r is considered borrowed at that point.

The NLL-friendly code works because it never refers to r / cur_link again, all it does is use the already-in-scope node (r2 in my examples).

The non-NLL-friendly one does not use that "maximally borrowing node", but instead tries to reöbtain a new node binding by borrowing from cur_link again, but cur_link has been, due to the aforementioned limitations, been maximally borrowed.