how to return a static str from a function
i tried

&str acquired from String without explicit memory leaking is not static by definition.

what is your use case for this?

if the string is dynamically generated, you have two options:

in rust we accept user input as string. i my case i need a function that convert this string input to str and return the value, is it possible
or just return string and convert to str in main function.

You should do this instead:

The only way to create a &'static str is to permanently leak memory.

or just return string and convert to str in main function.

yes, this is the better approach.

ok thank you helping me to make a choose
but one more thing can any one explain why str cause memory leak in detail ?

Using str does not cause a memory leak; using Box::leak does. You can use Box::leak to turn a String into a &'static str because leaked memory can last forever so it is no problem to make it 'static.

Using the &str type is a way to tell the compiler that you are not giving away ownership, which means that your memory must be owned by something else than the slice. The 'static in &'static str tells the compiler that the owner of the string slice will never be destroyed, which is only possible for compile time constants or leaked memory.

When you are returning a new string, you pretty much always want to give ownership away together with the string, which you do by using the String type.

You can think of this as creating a String container on the stack (the bytes of the string content live on the heap, but that's a separate consideration). The return value is then taking a pointer to a struct on the stack. When this function returns, the stack frame containing the struct will be freed, and (if this code compiled) the return value would be pointing to invalid memory.

When we say the value needs an owner, this is the nitty gritty detail; The String itself needs to be persisted somewhere that is not just the stack when you return from a function like this (the String is owned by the stack frame). Returning the String directly ensures that the caller owns that String. (I.e. transfer of ownership.)

And in a followup, I suggested watching this talk, which describes the motivation behind ownership and borrowing: 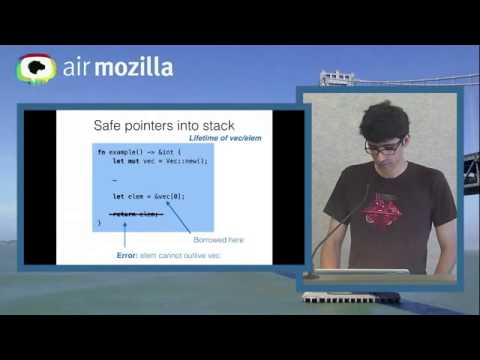