How can std::‎thread::JoinHandle::join catch panics?

The code below compiles only if dyn Fn is nwindSafe + RefUnwindSafe, because panic::catch_unwind requires it to be able to catch the panic.

However, std::thread::JoinHandle::join function is able to catch the panic even if the thread closure is not UnwindSafe + RefUnwindSafe:

If the child thread panics, Err is returned with the parameter given
to panic!.

I'd like to be able to know if my closure panicked, but UnwindSafe + RefUnwindSafe is too restrictive, I cannot use CondVar for example.

Yeah, there is this implicit property that Send kind of implies UnwindSafe, and Sync, RefUnwindSafe, precisely for this reason. And then Send is &mut-transitive, but UnwindSafe is not

All that to say, {Ref,}UnwindSafe are marker traits that are used as kind of a "linting" trait, we could say, there is nothing strict about what they enforce.

The way to "silence" this lint is by using the AssertUnwindSafe wrapper:

That being said, the lint is there for a reason; when doing this, you should strive to resume unwinding ASAP. That is, the following API is way safer / more sane:

I still don't get how join does it, and also why do I have to resume winding as fast as possible?

When you run a thread, the standard library will spawn a new thread and wrap the closure you've provided in std::panic::catch_unwind(). That way any panics which reach the top of the thread's stack are always caught instead of just terminating the thread silently.

From there it's just a case of stashing away the result of the std::panic::catch_unwind() in a shared location. Later, when you call join() it'll cause the caller's thread to block until a value is written to the location, then extract it and giving that result to the caller.

It isn't 100% necessary to resume a panic on the caller's thread. If you wanted to you can choose to handle it differently (e.g. by logging the error and continuing), although often when a thread panics that means something may be broken and you can resume unwinding to "gracefully" crash your application.

I still don't get how join does it

As Michael said, they basically use the catch_unwind_not_unwind_safe pattern I showcased above.

why do I have to resume winding as fast as possible

Good question, I forgot to clarify this point.

The issue with the so called "unwind safety", is that it represents a "soft crash" in the program: in the middle of some operation, the control flow is interrupted and starts unwinding up until the point where a catch_unwind() happens (such as a thread boundary, as you observed).

And this is problematic because we, as humans, can struggle to correctly account for these implicit control flow code paths in our logic.

I'll illustrate that with a dummy library example. First of all, we need an invariant to be upheld, let's pick the classic example of some "cached" index inside an adjacent collection, which verifies to always be a valid index / key of that collection:

This is a typical case of the library not being fully properly "unwind safe": inside fn drop_last(), there is an "early-return-unwinding" / panicking code path which interrupts the flow of the function midway, and thus the code that amended the index was never reached: 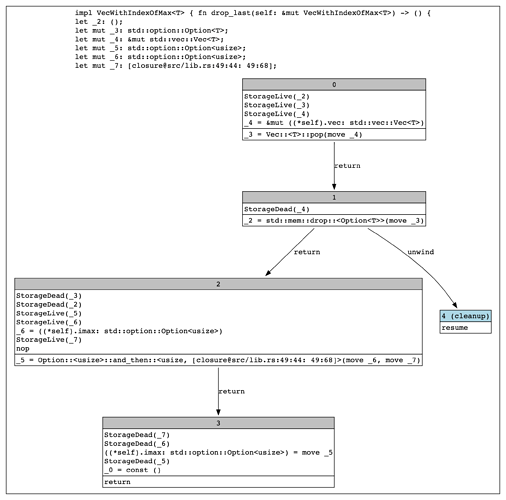 The idea is that many libs cannot uphold an invariant at all times, precisely because one cannot update a collect and an index simultaneously / "atomically". So one of those two needs to be updated first (FWIW, for a simple case such as an index, a trick to minimize this issue is to "push-then-increment-idx or "decrement-idx-then-pop", precisely to avoid issues such as this one). In the case of my example, the vec was popped first, and only afterwards was the index decremented (with the added "mistake" that an arbitrary drop was executed in between, which is the element introducing the unwind code path as shown in the diagram).

And so, it is very typical, for a library, to temporarily break its own library invariants, just to amend those right afterwards, before returning from the function. And, as I hope I have illustrated here, it is also almost as typical for libraries not to be that mindful of all the possible unwind code paths that would make exiting the function boundary earlier than expected, before the invariants are amended back.

All this to say:

once a code path panics, libraries may end up in a weird, inconsistent and buggy state.

This is a horrific situation, and that's what the UnwindSafe "lint" trait is for: it makes it so you can't have mutable non-owning references (in the broader sense: &mut unique borrows, as well as &Cell, &RefCell, Rc<RefCell<…>>, etc.) inside the closure given to panic::catch_unwind. Indeed, the situation with library invariants being temporarily broken almost always stem from mutating APIs, so "linting" against those effectively prevents the most frequent footguns from catch_uwnind.

And, as I mentioned, there is always the panic::AssertUnwindSafe(|| … ) escape hatch, for when the "lint" is being overzealous. But I hope you can see that abusing it is not great and can introduce logic bugs into your program, so it has to be used carefully, or the panic payload needs to be resumed ASAP, hence that sentence of mine