with nothing else takes 0.5s to parse (according to cargo build --timings).

In all other cases, empty crates (regardless of dependencies is generally 0.1s - 0.15s to build).

Does proc_macro_derive just add 0.5s to compile time ? What is it doing ?

I think you might be misinterpreting the output from cargo build --timings. 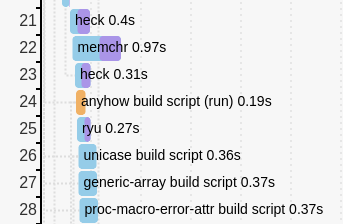 The colour scheme is

However, because the compiler loads proc-macros with dlopen and runs them at compile time, everything about a proc-macro is "non-parallelisable". Generating machine code and linking everything into a *.so file is slow, so that's probably where most of your 0.5s is going.

"Non-parallelisable" is probably the wrong word here, but basically I mean the parts that block the compiler from starting to build downstream dependencies.

I think you might be misinterpreting the output from cargo build --timings.

I think you're right. My previous understanding was:

However, your claim of:

And in this case, indeed, dependencies of the procedural macro needs to wait until an executable is built before the dependencies can start running.