The software consulting company I work for organizes biweekly "knowledge sessions" about technologies/techniques/frameworks/etc for whomever is interested about that particular topic. The general idea is that a single ~3 hour session is held where first the basics and underlying concepts are explained after which a practical part begins where attendees get some hands-on experience with the topic at hand.

Because apparently I never shut-up about Rust, the company has asked me to do a knowledge session about Rust, something which greatly excites me but at the same time I'm worried a bit about what to include and leave out from the session. Also what kind of practical assignment is doable for total newbies while at the same time shows off Rust's strengths?

So yeah, anyone got any experience with this or has ideas about how to best go about this kind of thing?

What kind of programming experience will the newbies have?

Yes. What is the audience for this session?

I can imagine tailoring things very differently for a house full of Javascript/Pythonistas vs those experienced in C/C++. For example.

Pitching the idea to management is another story again.

I suspect that rather than never shutting up about Rust, which might tend to annoy people, it would work wonders to create something in Rust that is useful for the company and demonstrates its advantages. Even just a little thing, a Rust skunkworks project.

If I was doing this, I'd probably try to prepare some examples where the rust compiler prevents a mistake leading to a runtime error.

Probably something like a function returning result that isn't "handled" (unwrapped or matched). Or a match statement with a missing arm. You think of less obvious examples.

But you probably also want a good chunk of time to let people try coding their own simple programs. Maybe the guessing game from the book, maybe something related to your work like say, a web server. Make yourself available to answer questions, help explain the compiler errors and what not.

You could consider a run-down of useful/foundational crates as well. I think most programmers can read through the book themselves on their own if they want to after the session. But it can be a bit overwhelming to know that they should/could use thiserr, anyhow, serde, rand, chrono, ...

But go with your gut, they are your teammates, you would know what they will benefit from more than us. These are just some ideas off the top of my head.

Ooh, crazy thought. Not actually suitable for an intro session like this but it might be fun to split into teams and build something in separate pieces. Like, a binary team and a library(s) team. Green team writes a parser, Blue team does the logic, Red team adds command line args... And have teams pull in other teams' crates as a local/git dependency. It might impress them how they can use each others code so easily. Like, with type completions and stuff from rust analyzer.

Bound to end in tears, but could be fun

Thanks for the replies everyone! The crowd will be quite diverse from C++ programmers, to pythonistas, to javascript devs. Though I'd say most of them are involved in developing web connected applications in some shape or form.

For this reason I thought I'd set up a small web server project with something like actix or rocket and let them fill in some response/request methods that are stubbed. It'd also be a neat opportunity to showcase the power of serde and the ecosystem around Rust.

I'd definitely go with Rust causing compilation errors for things that other languages fail to detect:

You can actually find snippets in a similar (but way shorter) presentation I did (in French) a while ago: 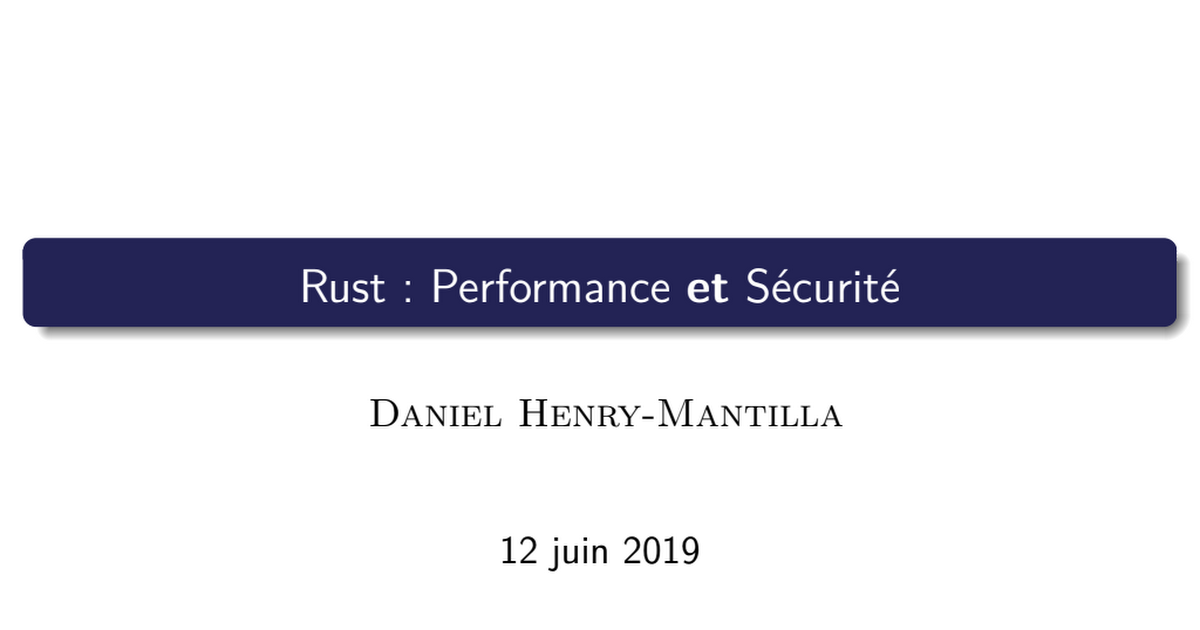 The key rule, for a 3-hour presentation, would be not to try to teach how to program in Rust, but rather, to showcase some of these statically caught bugs, as well as some success stories, especially involving performance (since the one laughing in the corner up until this point would be the fully functional languages, which are indeed great at catching / preventing many bugs thanks to their idioms (e.g., almost no mutation), but those idioms do come with performance penalties).

You can also mention initially overlooked things about a language, such as its tooling (Cargo: adding and using dependencies Just Works™; doc generation is easy and great, leading to an ecosystem or rather well documented crates; the cross compilation story is actually not bad at all, even if it still has some rough edges here and there (mainly when C dependencies are involved)), and its community.

Oh wow that's great, definitely gonna borrow heavily from your presentation! I especially like the Python example, because it looks so innocent on first glance.

If you have lots of prep time, I could imagine a very compelling presentation that shows the same program in many different languages, usually with a few "identical" bugs and how those bugs would be caught. But that sounds really hard.

Perhaps you can take some inspiration from: