This past fall, three former GnuPG developers began working on a new OpenPGP implementation in Rust called Sequoia. As it's starting to shape up and become useful, I feel now is a good time to announce the project to the larger Rust community, and hopefully get some feedback before our first release.

I presented the project at the recent Delta X gathering (recording). The presentation covers our motivation for starting the project, an overview of Sequoia's architecture, and the project's status. The tl;dr is that we're actually pretty far: Sequoia is already being tested with the p≡p engine, and other projects, like Delta Chat, have begun replacing GnuPG or NetPGP with Sequoia. 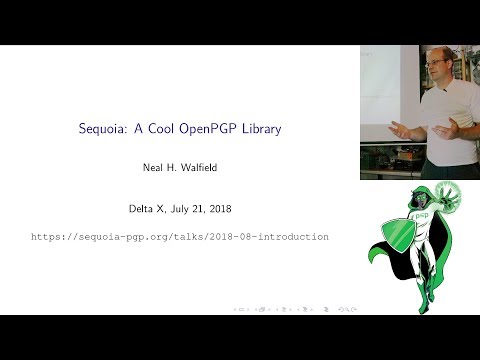 I'm a big fan of PGP (via GnuPG) and I'm glad to see a Rust native implementation.

However, and I think this is kind of an issue if one would to use Sequoia as a dependency in ones code: the license being GPL.

Would you consider LGPL?

(I don't have anything against GPL, I license almost all my code as either GPL or LGPL, but for libraries GPL is kind of an issue...)

Keep up the good work!

Our medium term plan is to relicense Sequoia under the MPL, which is like the LGPL, but less of a burden for things that are statically linked, like Rust code. The issue is that the existing structures within the foundation that we work at mandate that all code be released under the GPL. We're working with people to change those structures.